Through the guiding light of God’s Spirit, Guiding Light Mission partners with individuals to fulfill their God-given potential — through rescue, recovery and re-engagement in community.

ENCORE TALENT: Developing human potential in business and with the homeless 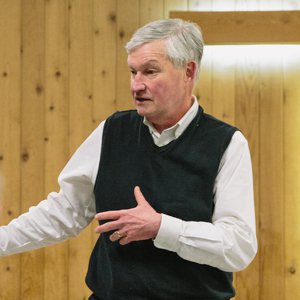 As the owner of what once was the fifth largest Burger King operation worldwide, Stuart Ray worked hard to allow his customers to “have it their way.” In his encore role as executive director of Guiding Light Mission on the edge of downtown Grand Rapids, he gently urges his clients, “try to see it my way.”

Stuart emphasizes that it’s not a stretch to go from operating fast-food eateries to restoring the lives of men affected by alcohol, drugs, depression and homelessness. It’s all about building a successful program and moving people forward. “For me, this work is about economic development,” he says. “It took me nine months to figure that out, but every one of these guys has special gifts and talents . . . As I look at it, God gives everyone special gifts and talents; how do I facilitate those? It’s exactly what I did at Burger King. My last 10 years were really about human potential.”

Stuart has worked hard to change the culture at Guiding Light. Toward that end, he’s strictly enforced the “No Loitering” rule on sidewalks bordering the mission. No more sitting around in the lobby watching TV, either. Act like a gentleman. And if a guy shows up, he’d better be prepared to work.

Above all, a spiritual component drives Stuart’s mission: “It’s about putting people back to work,” he says, “but with Jesus in the mission, and with faith-based Gospel-operating principles.”

Since he was hired in 2009, Ray has transformed Guiding Light’s prospects, bringing a twinned sense of mission and financial stability to Guiding Light. When he took over, Guiding Light was $300,000 in debt with virtually no assets. By 2015, the mission was thriving, with $1.7 MM in revenue and a goal of $2.1MM for 2016.

This story originally appeared on the Encore website for Grand Rapids Community Foundation.